Higher education as a vehicle for peace and social justice: The case of University of Rojava

The University of Rojava represents a unique and exciting initiative of the Rojava people to establish a democratic education system amidst the ongoing violent conflict in Syria. 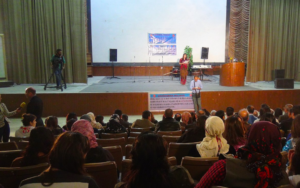 This blog reflects on the struggle of the University of Rojava to establish a democratic education system amidst the ongoing violent conflict in Syria. The University of Rojava was founded in Qamişlo in 2016 in the autonomous region of North and East Syria, also known as Rojava, in the midst of ongoing violent conflicts, mass displacement of millions of Syrian people, and extraordinary geopolitical tensions. This region is where the majority of the Kurdish population and other ethnic and religious communities such as Arabs, Assyrians, Armenians, Syriacs, Chechens, Yazidis, and others live. The diversity of this region was disrupted by colonial mappings of the Middle East in the early 20th century, followed by the rise of the newly established nation-states and decades of war and violence. With the Syrian people’s uprising turning into a civil war from 2011 onward, Kurds and other people in Rojava escalated their struggle for autonomy which turned into what is known as the Rojava revolution in 2012. Since then, the revolution has focused on defending communities of the region against attacks from all sides. The revolution aimed to establish self-governing communities based on principles of grassroots democracy, women’s freedom, co-existence of all communities, cooperative economy, and ecological living. This is historically significant, as the Rojava Revolution proposed an alternative escape for people from decades of suffocating conflicts and political repressions.

After the Rojava Revolution in 2012, the people of this region faced multiple social, economic, political, and environmental challenges while an inhumane situation in Syria prevailed. The Rojava region was under vicious attacks by Islamist jihadist groups, mainly Daesh (the Islamic State) from 2012 to 2017, and the Turkish state between 2017 and 2019 with continuing threats of new invasions, air strikes, and shelling. Turkey has occupied regions under the control of the Autonomous Administration of North and East Syria (AANES) such as the canton of Afrin since 2017 and the areas between the cities of Qamishlo and Kobani, including the cities of Serê Kanî and Girê Sipî since 2019. Despite the above challenges, the AANES and people of the region remarkably continued rebuilding their social, economic, and educational institutions and structures, including schools and universities.

The foundation process of the University of Rojava is ongoing, as it takes experiences and practices of learning in higher education from various parts of the world, especially among marginalised communities, into consideration. The University aims to reflect cultural and philosophical characteristics and values of certain intellectual traditions of Mesopotamia in its curriculum. This is a land where different ethnic, linguistic, and religious communities have lived for thousands of years, and their quest for dignity and prosperity has shaped their history. The University’s multilingual programmes, such as in sciences, art, technology, social sciences and humanities, and teacher training for primary and secondary schools, allow students from diverse ethnolinguistic and religious communities to study in their own native languages as well as in Arabic and English. This is historical and unprecedented as minorities of the region and their languages and cultures have been subjected to different forms of repression and state violence. They were forced to assimilate into the dominant state-sponsored Arabic language and culture. Their rights were denied, and non-Arabic languages and cultural practices, specifically Kurdish, were banned.

The University of Rojava uses contemporary techniques in scientific and academic activities and believes that the concept and practices of education in the larger Middle East should be redefined in order to change the fate of war, destruction, and displacement imposed on the people. The University of Rojava aims to create a critical and innovative environment to train a new generation that employs scientific research and knowledge in learning and education, respects nature, society, and women’s rights, and communicates with their own cultures and languages. The founding principle of the University is that a society where justice, peace, and freedom is preserved starts with education, and it is an urgent task for a conflict-ridden region. This initiative of local communities in Rojava serves as an example of hope, dedication and possibility for imagining and achieving real change through educational development that underpins the principles of social justice.

Sardar Saadi has a PhD in sociocultural anthropology from the University of Toronto. He is the Director of the Institute of Social Sciences at the University of Rojava. Dr. Saadi is a member of the Peace with Justice Network.